EUR/USD trading in the form of CFDs 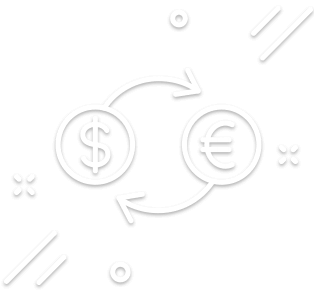 There’s little doubt that the most popular currency pair among currency traders is the EUR/USD. Why? Well, for starters, many investors prefer to trade instruments they know well and – to be honest – virtually every trader knows this volatile duo.

The interest surrounding the Euro’s value in comparison with the US dollar has been the darling of currency traders since the Euro’s inception back in 1999. The rivalry between Europe and the United States is as popular in financial markets as it has ever been in history.

In this article (short! We promise it’s going to be short!), we’ll explain how you can trade the EUR/USD in the form of CFDs and explore elements that could affect its price.

First, a bit of history

The US dollar has been around for quite some time. In 1913, the central bank of the United States (the Fed), issued notes that represented a specific amount of gold held in the Fed reserves. These notes were also the original US dollars. In 1971, US President Richard Nixon unpegged the Dollar from the gold standard. This allowed the Fed to print dollars at any frequency they deemed fit, since there was no longer a finite commodity in place to back its value.
We don’t want to imagine what would have happened if someone allowed us to print as many Dollars as we wanted, but luckily, the Fed is far more responsible and – at least for the most part – showed restraint.

In comparison to the Dollar, the Euro is just a “baby”. It’s only been around since 1999 and only first came into circulation in 2002, overtaking former national European currencies. In 2009, the European Central Bank (ECB) finalized its political authority. There is no commodity backing the Euro’s value. Like the Dollar, it is a standalone, fiat (paper-based) currency.

The difference between the EUR and the USD

This topic may seem pretty obvious to most. After all, one is the currency used in the United States and the other is used in Europe. But there’s actually a whole lot more under the surface including their properties, how they are valued, and how the correlation between the two creates potential market opportunities.

Properties
Euros, like US Dollars, are printed at an arbitrary rate. Both paper-based (fiat) currencies are valued based on their perception and market sentiment exclusively. Compare that to precious metals like gold - for example - whose value is based on its supply. That’s because its supply is finite and only so much gold can be mined at any given time. Euros (or US Dollars) on the other hand, can be printed at any frequency the European Central Bank or the Fed deem fit.

When the Fed does decide to increase the frequency of dollar printing, it’s called quantitative easing (QE). When QE is announced, the US Dollar could drop in value against the EUR. That’s because a greater supply of Dollars, like almost anything else, will often decrease its value. However, quantitative easing by either the Fed or the European Central Bank (ECB) doesn’t guarantee in any way a change in currency value.

So, what does affect these currencies’ value?

Many different factors come into play that can put a dent in the EUR/USD balance. A big one is interest rates. Interest rates are a percentage of interest that central banks set to loans issued by local banks.

Why would a bank lower interest rates? Simple; let’s say there’s a slowdown in the United States. People aren’t buying homes because they simply can’t afford them. This has a ripple effect on the entire economy. That’s because people and companies who build the homes, including contractors, developers and architects, as well as real estate agents that sell the homes, will often find themselves without a job. More importantly (for the Fed and ECB) local banks are losing out on potential interest they could receive on loans if only people could afford to buy houses. So the central banks will often ‘stimulate’ the economy by lowering interest rates making it cheaper for the average American or European to be able to afford a home.

When the Fed lowers interest rates, it will often weaken the value of the Dollar. That’s because less Dollars are needed to buy a house than last week (or however long ago the Fed decided to lower interest rates). On the other hand, if the Fed does indeed decide to raise interest rates, it is a sign of a healthier economy.

The same principles apply to Euros in relation to the European Central Bank. This is also why Forex traders will often pay close attention to monthly unemployment reports like the NFP, as it offers a key insight into the health of an economy while helping them in their attempts to read the Fed’s - or ECB’s - next move. Reports showing how many new and old houses being sold are carefully tracked by many currency traders as well. In short, any sort of report or data showing economic growth or economic weakness will grab the attention of many currency traders looking to take advantage of market opportunities. However, none of these factors are any guarantee of a rise or drop of either the USD or the EUR.

How to trade EUR/USD in the form of CFDs

Before we explain how people trade the EUR/USD in the form of CFDs, let’s take a minute to understand what CFDs are.

CFDs are Contracts For Differences, agreements to buy or sell the price of a specific tradable instrument - in this case the Euro or Dollar - for a specified rate. So, for example, if you ‘Buy’ Euros and ‘Sell’ Dollars in the form of CFDs, you don’t actually own the dollars you buy. Instead, you are speculating on its price movement. Believe the Euro will rise against the Dollar? Open a ‘Buy’ position. Believe it will fall? Open a ‘Sell’ position. This is how CFD traders take advantage of price movements in different directions.

Are we going too fast? Take a quick break and learn more about CFD Trading.

What is leverage trading?

When you trade with leverage, your trading power is enhanced. This means that if you trade with just $200, it can turn into $80,000 in trading power once you apply leverage. This gives you more purchasing power when you open your deal. It grants you a greater potential to take advantage of in a successful trade – but also involves increased risk to your investment. Remember: Leverage is a useful and very popular tool, but you should take the time to learn how to use it properly.

For more information about leverage, check out our What is Leverage article.

Want to open your first deal on currencies? If you are, here’s a quick example of how you can do so on the iFOREX platform in just four quick steps.

What can impact the EUR/USD prices?

Several different external factors can potentially impact Euro and US Dollar prices. Like other CFD instruments, supply and demand play a key role. However, other elements can also affect the price of these two currencies and here are just a few examples:

Want to learn more about the factors that affect the market?